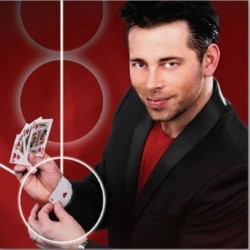 There's just one rule: do not believe your eyes. For his fourth Edinburgh show, BBC, ITV and NBC favourite Chris Dugdale returns to disarm, deceive and downright confound as he weaves together the past, present and the completely implausible. Warping time and space, he'll leave you questioning everything you believe to be true. Would you play cards with this man? We wouldn't. Twelve Royal Command Performances. 'Masterful magic ... astounding, perplexing and, quite frankly, amazing' (Metro). 'The undisputed king of the close up card trick' (LBC Radio).

In a Chris Dugdale live show - there is but one rule: do not believe your eyes.

For his fourth Edinburgh show, BBC, ITV and NBC favourite Chris Dugdale returns to disarm, deceive and downright confound as he weaves together the past, the present and the completely implausible.

Sleightly Dishonest tampers with time in a way that no other show at the Fringe can, and at times, audiences won't know if they've spent an hour or an instant in Chris' company. The concept of time will be challenged as Chris brings a cavalcade of high impact visual magic combined with sleight of hand, mischief, mind reading and danger to the stage.

And if the re-ordering of time weren't enough, the show also features a highly quirky modern twist on what is often considered the world's most dangerous trick - The Bullet Catch. At least 15 magicians have met an untimely end performing this potentially lethal trick - proving the lengths to which a true magician will go, to provide their audiences with a genuinely show-stopping finale.

But this show is more than a mind-bending trick; Chris' real power lies in his ability to take the audience on a journey that will leave them questioning reality and illusion - not just onstage but in their daily lives.

Chris Dugdale started learning magic at just five years old and now has a whopping 12 Royal Command performances under his belt. Performance is Chris' first passion: he has entertained The United Nations, Her Majesty The Queen, UEFA, at 'The Richest Gathering of Human Beings Ever'... in Vegas, Dubai and the Seychelles, played to packed houses at London's Riverside Studios, to Angelina Jolie and supported The Who's Roger Daltrey and Queen's Roger Taylor... Chris is also the co-author of Close Up Success, the definitive guide to close up magic, along with colleague Phil Jay and recently completed his first book Sleightly Dishonest - Tales and Observations From A Globe Trotting Magician.

We would say this show has to be seen to be believed, but...