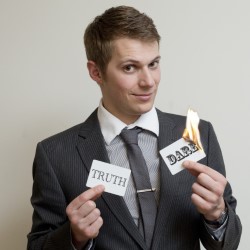 'He made what seems impossible to the rest of us look effortless and is a reminder of how cool magic is' (BroadwayBaby.com). Chris Cook returns to the Fringe with the first ever fully interactive magic show. Chris has some brand new tricks up his sleeve following on from the success of his hit 2014 show, Charlatan. Chris Cook is an award-winning young magician with an original style and quick-witted charm. Expect a show full of cheeky audience interaction, devilish trickery and shocking surprises. Are you ready to play Truth or Dare?

Award-winning young magician Chris Cook, returns to the fringe with the first ever fully interactive magic show. Expect a new show full of cheeky audience interaction, devilish trickery and shocking surprises. Are you ready to play Truth or Dare?

Chris Cook is a unique performer with an original style and quickwitted charm. This show will challenge the audience to step out of their comfort zone and dare them to experience something different. This is more than just a magic show, it's an interactive experience. If you want to sit and watch a show, this isn't for you. If you want to be a part of something, then let's play...

Expect a cheeky, fastpaced show full of laughs, mystery and surprises as Chris plays Truth or Dare with the audience live on stage. This is Chris's second Edinburgh Fringe show after the success of 2014's original magic and storytelling show Chris Cook: Charlatan. With breathtaking tricks and charming comedy, Chris's performances weave together a story set to pull at your emotions and challenge your perceptions.