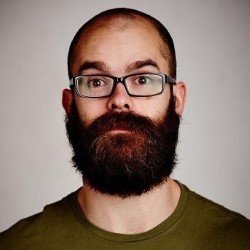 Edinburgh debut; Chris Betts loves to watch people, and his favourite view is from behind the bar. Betts has studied mankind at our watering holes and come back hopeful. Think Jane Goodall polishing glasses! Comedy Reserve 2014, NATYs finalist 2015, Leicester Square New Comedian of the Year finalist 2014. 'Canadian Chris Betts has a confident style and a solid set ... a glint of steelier edge' (Chortle.co.uk). '...he's an enticing prospect, a Canadian who deals with off-kilter thoughts sharpened by his occasional prod at taboo topics' (Independent).

From his prime viewing platform, behind the bar, Chris has been privy to the unexpected and the ridiculous. Skillfully weaving together sharp observations, confident and enticing delivery and original perspectives, Chris Betts invites you to join him for a stand-up show with a side of nature documentary which asks why we are 'us' and they are 'them'.

Over the last five years, Chris Betts has performed all across Canada, the United States and the UK at independent venues, comedy clubs, and international festivals including Dave's Leicester Comedy Festival, SXSW and the Zulu Comedy Festival. Having been named one of the Montreal Mirror's Top Ten Comedians in 2012, Chris moved to London and in 2014 was chosen to appear as part of prestigious package show The Comedy Reserve at the Pleasance during the Edinburgh Festival Fringe. He has recently been a finalist in both the Leicester Square Theatre New Comedian Of The Year competition and the 2015 NATYS (New Act of the Year Show) at the Bloomsbury Theatre.