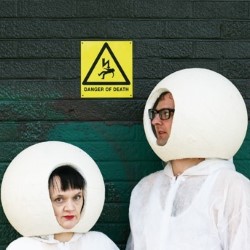 Free trip to space. Hopefully a return trip. 'Like Spike Milligan on MDMA' (List). 'A weird and wonderful double act of surreal, whimsical and thoroughly endearing comedy' **** (BroadwayBaby.com). Two Complete Idiots (Foster's Award Winner, Dr Brown) take you on a trip to space and beyond and (maybe) bring you back to Earth. Mixing physical comedy, storytelling, science and philosophy, Dead Ghost Star is for 'those who like an astral flight of fantasy into the very weird' (List).

Thought it would cost £250,000 to go into space, and that you had to go with Richard Branson? Wrong. Explore the universe (black holes, aliens, time travel, talking stars) with Cheekydinner FOR FREE. A small donation is suggested if they get you back to Earth safely (it's a big if).

Described as 'enjoyably batshit - for those who like an astral flight of fantasy into the very weird' (List) when it premiered at Edinburgh Fringe last year, Dead Ghost Star is now back and more batshit than ever, thanks to the help of clown director, Lucy Hopkins (Le Foulard).

Dead Ghost Star is a mind-blowing cocktail of physical comedy, storytelling and science. Enter the rocket in August and you'll not look back.