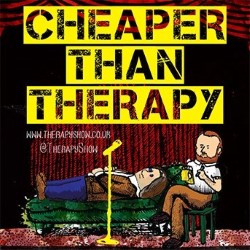 Chat show performed on the following days in August 2015...

Every comedian seeks and thrives on the laughter of their audience, but that's not what's most important to them. That prize belongs to the satisfaction of their own insecurities and psychological defects. Now in its third year! At Cheaper Than Therapy, some of the Fringe's best comedians talk about their anxieties, hang-ups and phobias. New line-up each night.