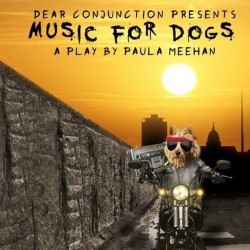 Written by Ireland Professor of Poetry, Paula Meehan, Music for Dogs is a story of survival, set during Ireland's Celtic Tiger years, and takes place on Dublin's Burrow beach. By turns funny and poignant, it tells the story of Jane MacDonald and how she made the fortune she is leaving to her estranged brother and sister. Though the context of Janey Mac's story is a dark one, her essential humanity and joy in life shine through.

Paula has published six award-winning collections of poetry, including Dharmakaya and Painting Rain. She has written plays for adults and children, most notably Cell and The Wolf of Winter.

Selections of her poetry have been published in French, German, Galician, Spanish, Japanese, Estonian and Greek. Dedalus Press have recently republished Mysteries of the Home, seminal poems from the 80s and 90s.

Irish actor Carol Caffrey (returning to the stage after a 24 year break) plays Jane MacDonald, a role poet Liz Lefroy says "she was born to play". Back in the 80s in Dublin, Carol worked as a professional actor with Moving Theatre, TEAM Theatre-in-Education, The Project Arts Centre, RTE and the comedy duo, The Bawdy Beautifuls. Now living and working in Shropshire as a writer (publications include Bare Fiction and The Fish Anthology), Carol spent the intervening years as a full-time mother, part-time teacher and relief carer for her siblings (as illness struck) before getting her glad rags on again for this production.