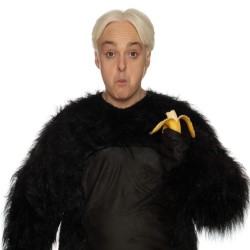 An hour of fresh stand-up from everyone's favourite utterly unpronounceable Irishman. Weddings are tricky, half-Irish half-Ghanaian ones are even trickier. Caimh is an award-winning writer for numerous TV shows, has supported Sarah Millican on tour and is an early front runner for husband of the year 2015. One of those things isn't true. 'Delivers cracking hi-octane anecdotes' (Independent). 'Outstanding' (Telegraph). 'Consummate skill ... a masterclass' (Chortle.co.uk).

Getting married has taught Caimh that weddings are tricky, but half-Irish half-Ghanaian ones are even trickier. From the battlefront of an English vs Irish stag do, to a trip-of-a-lifetime in the well-known honeymoon paradise, Mobile Alabama, the show provides an irreverent look at prejudice set again the backdrop of romance, root vegetables and really big rodents.

Part of PBH's Free Fringe, Bride and Prejudice - which was nominated for Best Show at the Buxton Festival Fringe in July 2015 - has been packing out seats during its Edinburgh run.

Caimh is firmly established on the comedy circuit, performing both in the UK and internationally. Other than adjusting to married life, 2015 has seen Caimh providing tour support for Gary Delaney and Sarah Millican, as well as writing his first novel, The Man with One of Those Faces.

He is also a BAFTA-nominated writer and has written for numerous TV shows, including Mock the Week, A League of Their Own and The Sarah Millican TV Programme. Caimh was a winner in the BBC's Northern Laffs sitcom writing competition, where he was mentored by The Royle Family's Craig Cash and Phil Mealey.