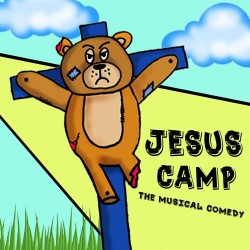 From the creative team behind the 2014 Edinburgh smash Man Enough comes a new musical comedy inspired by the award-winning documentary, Jesus Camp. Lucy's a self-confessed bible basher from a broken home, and Chad's a Jesus-hating military school dropout. They're about to have a summer like no other at Sarah Chastity's Christian Camp for Kids, where brainwashing is the order of the day. Join our all-American heroes as they battle with faith, hormones and the never-ending urge to break into song. A rip-roaring, born-again, hallelujah of a musical comedy! Warning: not for the biblically sensitive.