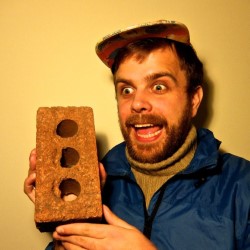 Surreal clown Brickhead takes you on a journey to worlds both weird and profound. A Lecoq-based training at LISPA and a member of acclaimed theatre company Intuitive Creatures, Brickhead ventures out on his own with a solo clown show exploring things... like... yeah. Fresh from successful runs at the Brighton and Prague Fringe Festivals, Brickhead's show is an absurd, intimate and heartfelt experience not to be missed. 'Hard to explain and impossible not to like' (FringeReview.co.uk). 'Ludicrous humour at its best' (BroadwayBaby.com).

London born and bred alternative comedian Brickhead, aka Dan Onslow, will be performing his debut solo production, Brickhead: Yeah Yeah, at the Edinburgh Fringe at 22.45 from 8th August until 29th August 2015 (not 17th or 23rd), Cowgatehead (Venue 32), Room UpOne S.

Having built a following from his regular appearances on the alternative comedy/cabaret circuit in London and shows at both the 2015 Brighton and Prague Fringes, this clown, with a Lecoq-based training from LISPA, will perform for 20 nights at Room UpOne S, Cowgatehead as part of PBH's Free Fringe. Tickets are free with donations gratefully accepted at the end.

Brickhead: Yeah Yeah is a journey to worlds both weird and profound. Brickhead struggles to express himself through words as they are... sort of like... hard to... like... yeah. Instead, he relies on bizarre interactions delivered with his unique charm to reveal some sort of strange wisdom. Dancing, philosophical questions, wigs, performance poetry and audience interaction. This show is definitely for those who like their humour weird and wacky.

Odd, weird and stupid but also playful and good fun, Brickhead: Yeah Yeah is 50 minutes of ludicrous humour inspired by the performer's grounding in the teachings and practices of legendary French theatre gurus Jacques Lecoq and Philippe Gaulier.

Dan Onslow, creator of Brickhead said, "The full show has gone down well with audiences in Brighton and Prague. It's about time that I bit the bullet and did the big one! A late night show with a rowdy Free Fringe crowd feels like the perfect fit. Time for Brickhead to say yeah!"

Brickhead is a new creation from Dan Onslow, 1/4 of acclaimed theatre company Intuitive Creatures. Formed in late 2012, Intuitive Creatures' debut show Intuit This received 5 star reviews and enjoyed sell out shows at both the 2013 Camden Fringe and 2014 Brighton Fringe.