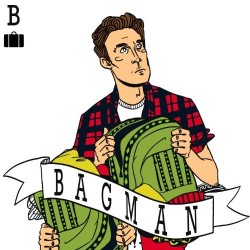 A deadbeat character comedy taking you on a journey through the stories
contained within the contents of a forgotten cloakroom, BAGMAN is the debut solo show by Brendan Murphy (NewsRevue, Radio 4's Show What You Wrote, BBC Comedy Feeds) and directed by Hamish MacDougall.

With a set that may include some of the audience's own belongings, each bag on display holds a different character and unwraps the stories we use to clothe ourselves; a stupid and surreal, one man Sesame Street without the puppets.

Brendan Murphy is a Spotlight Award nominated actor, comedy writer and improviser regularly performing across the UK with The One Hour Plays,
BattleActs! and alongside members of Austentatious, Boom Chicago, Monkey Toast and The Show Stoppers in the longform group The Bishop. Other shows at EdFringe 2015 include The Beau Zeaux and BattleActs!.

Hamish MacDougall is an Associate Director of The Kings Head Theatre andAssociate Artist of The National Youth Theatre. Directing credits at Edinburgh Fringe Festival include A Slight Ache by Harold Pinter (starring Simon Munnery, Thom Tuck and Catriona Knox) in 2014 and Below The Belt by Richard Dresser (starring Mike Wozniak, Tom Golding and Graham Dickson) in 2013. Hamish was Assistant Director on Theatre de Complicite's 2014
revival of The Master and Margarita at The Barbican (dir. Simon McBurney).