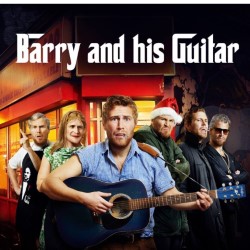 One-man musical comedy about a young man, Barry, who works in a cafe where he gets told off by his boss but has a real crush on his daughter, the waitress, Mary. Barry dreams of becoming a pop star but one day gets involved with a crime gang by mistake. That leads him onto an adventure he will never forget. All the characters are portrayed by Bragi Arnason who is also the writer and songwriter. Ten funny characters. One man. An adventure in the big city.