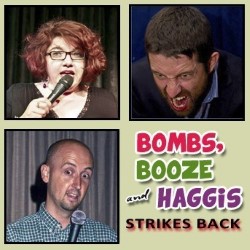 A Scotsman, an Irishman and a Jew are back for a second year upon popular demand - the 2 Celts and a Cougar - Andrew Gilmore, Gary Sansome and Daphna Baram, are hosting a late-night frenzy of laughs, special guests and surprises. You might even lose your haggis virginity.

After a stunning success last summer, they are back! Three comedians from diverse backgrounds tastes and inclinations present their freshest comedy sets and host their favourite comics.

London based Israeli Daphna Baram, Scotsman of Australian fame Gary Sansome and the Dubliner who rocked Bangkok Andrew Gilmore are joining their talents and experiences as stand-ups and promoters to create a jolly late-night comedy show at Cowgateshead 1.

Gary Sansome is a tough speaking (to English folk anyway) off the wall Scottish Comedian and MC. He ran Alice in Funderland Comedy Club in London, performed across the UK, Europe, Australia and the US and is back in Edinburgh for his 5th EdFringe. Twice Comedy Cafe New Act Winner, Laughing Horse Semi Finalist 2014 London Comedy Store King Gong Finalist.

Andrew Gilmore - Our dark horse from Dublin, gigged in Bangkok, across Ireland and in the UK, ran the Bad-Ass Comedy Club in Dublin and toured Ireland with the stars of TV hit Father Ted, Patrick McDonnell and Joe Rooney. (17-30 Aug Andrew will be replaced by a different excellent Irish act every night).

Daphna Baram - Israel born London based human rights lawyer turned journalist turned comedian. She ran MissD's Silver Hammer Comedy Club in London. Edfringe 2015 is her 5th Fringe. Her solo show Something to Declare runs 7-29 Aug (No shows 10, 18 & 24 Aug) at Just Out The Box, Just The Tonic Caves (Venue 88). Performed across the UK and Ireland, in Paris, Rome and Jerusalem.