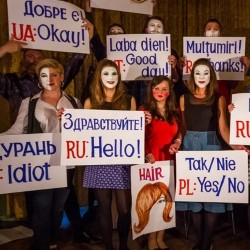 Everybody knows that all the UK's problems are caused by Eastern European immigrants with funny names and an annoying habit of working too hard. But who exactly are these people? What do they want from us? Featuring mean gangsters, glamorous ladies, romantic bricklayers and professional toilet scrubbers, Bloody East Europeans combines comedy, tragedy, Red Army songs, Ukrainian folk ballads and 70s disco hits to tell you everything you ever wanted to know about these strange and unpronounceable people. Performed by the Molodyi Teatr, a London-based Ukrainian company. Comes with a free lesson in Eastern European.