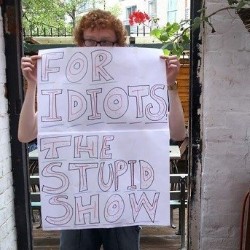 A stupid show made by idiots, for idiots!* Join frustrated satirist Ben Powell and frantic artist and comedian Mike Milling for an hour of comedy, satire, art, music and awful, relentless stupidity. Joyous, alternative comedy fun from two rising stars of the UK circuit. It's a fun show with comedy and pictures and Lego and music and lists and props and also a bit of jumping around here and there. A sell-out hit when previewed at the Greater Manchester Fringe Festival in 2014. *A limited number of non-idiots will be admitted.