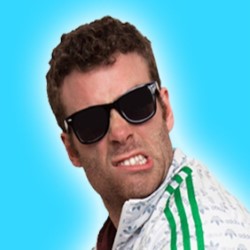 Armed with just his bedroom-made beats and a very literal multiple personality disorder, Iowa's dopiest music producer Floe-Joe invites you to indulge in his wacky world of sketch, funk and self-centred banter! An intimate listening party of deep-soul music with all the fancy spiel to go with it. Luckily, the spiel is told via a playlist of character comedy sketches by faces that share the brain of music producer Floe-Joe! 'A stramash of techno beats, character comedy and choreography' (BroadwayBaby.com).

A chaotic, one-man blend of comedy sketches and urban music!

Armed with just his bedroom-made beats and a very literal multi-personality disorder, Iowa's dopiest music producer invites you to indulge in a wacky world of sketch, funk and manic-bantering!

A brand new hour of unpredictability, Floe-Joe, the host provides an "intimate" listening party of deep-soul music joints with all the fancy spiel. Thankfully, this spiel is told through a playlist of comedy sketches by faces that share the brain of a multi-platinum, award-wanting recording artist!

Ben Fairey began his career contributing music to TV (Sky1's Got To Dance, BBC3's Unzipped) and acting for stage and film (Channel 4's Random Acts, M.L.E.). This marks his second solo show at the Fringe with brand new material inspired by his experiences working in different areas of the arts and the personalities he met along the way.

The resulting show is a combination of deep-soul backing tracks and a collection of surreal character comedy with a dash of choreography and singing thrown in for good measure.

Bar a strong language warning, it's the kind of show offering something for everyone. Cast your previous experiences aside, Floe-Joe's aims to alter the expectations of live entertainment with an emphasis on comic banter and funky music!