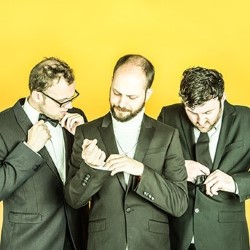 Having proven themselves as big time sketch heroes with the best reviewed sketch show at the 2014 Edinburgh Fringe, BEASTS are returning to Edinburgh to film their very first Live DVD and they want you to be a part of it (the audience part).

Everyone knows that you haven't made it as a comedian until you've recorded a Live DVD. The BEASTS boys have found the perfect spot to make theirs, eschewing the O2 in favour of a dark hot room in Edinburgh. The pressure's on, the budget's tight and they can't work the equipment, but other than that everything is going brilliantly. The battle now is to see if these three idiots can keep their egos in check once the camera starts rolling.

BEASTS' third live show Solo, received huge critical acclaim at the Edinburgh Fringe last year making it the top reviewed sketch show at the festival. Solo was also named as one of the Amused Moose Comedy Award's Top Ten and went on to sell out several shows at London's prestigious Soho Theatre. They also made their BBC Radio 4 debut in Sketchorama in 2014 and their filmed sketches, including "Mr Needlemouse" - the origins of Sonic the Hedgehog (which has achieved over 97,000 views and counting), can be found on their youtube channel.