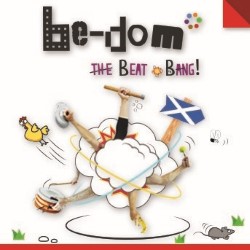 Irresistible percussive party filled with rhythm, comedy and audience participation! be-dom bring their charismatically energetic vibe back to the Fringe in an interactive, innovative new show that is sure to entertain you ... yes, you! 'be-dom is a fabulous recipe for one of the most original and fun-filled hours on the Fringe ... had the crowd on their feet at the close in rapturous applause and well-deserved it was too' (Herald). 'It's hilarious... The group's warm, accessible and fun manner allows them to talk to every generation, without actually ever saying a word' (List).

"be-dom" is a percussion/theatre/comedy company based in Portugal and performing this year for the 3rd time a long run at Edinburgh Fringe Festival.

We have already toured in many countries (Macao, Bahrain, Germany, Italy, UK, Spain, etc ) and have recorded TV Commercials and do a lot of corporate events with customized shows (we perform with anything the clients asks us to - video Hilti France)

STV has already recorded a piece with the band this year!