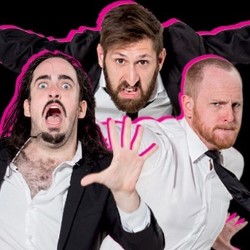 Aussie Edinburgh favourites return with a killer new show. Unique, tight, fresh, filthy, but best of all flat out, laugh 'til your face hurts funny. Hold onto your seats, don't blink! You won't want to miss a beat. Expect 60 minutes of pure sketch comedy that transports you into the warped world that is Aunty Donna - turning the ridiculous into the sublime. 'Comparable to some glorious crossbreed of The Mighty Boosh and Flight of the Conchords ... appreciation and split sides were universal' ***** (BroadwayBaby.com). 'Ingenious and brilliantly crafted ... smart, fast-paced, hilarious and wonderfully absurd' (List).

Leap into the warped world of Aunty Donna - the Aussie sketch troupe who won hearts with their debut Edinburgh Fringe last year with sold out shows night after night.

Aunty Donna's unique brand of comedy is tight, fresh, filthy, but most of all it's just flat out, laugh until your face hurts funny.

With a delicious crassness covering some highly intelligent, truly original, often very dark sketches, Aunty Donna are returning to the Edinburgh festival. This time they are caught in an epic battle of good versus evil with a rival comedy troupe (played, of course, by the boys themselves).

Hold onto your seats ladies and gentlemen, and don't blink, because you won't want to miss a beat.

In 2014 the boys had their US debut at the SF Sketchfest, and won awards for their YouTube channel, (TheAuntyDonnaChannel). This year they had to move from a 130 to a 500 seat venue at the end of their Melbourne run to keep up with demand, and the boys have also just wrapped up their TV pilot for ABC (Australia's public broadcaster).