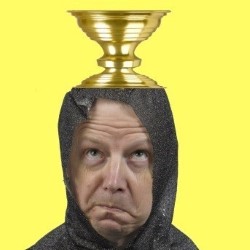 Leave your boring life behind you and come on a quest for the Holy Grail. Follow Sir Augustus (the so-called Knight of the Trestle Table) on his journey of discovery and his adventures with the Naked Rambler. See how he found peace and happiness in the unlikeliest of places, and how you can too. All will be revealed (literally). Mythical, musical and comical (and that's just Augustus). As seen on BBC One.

Created and performed by Augustus Stephens, as seen on BBC One's The Naked Rambler.

When Stephen Gough, the Naked Rambler, walked naked from a Scottish prison to his home in Southampton, Augustus joined him for two days and was the only man to be arrested along with him - twice. Luckily, Augustus has always been released without charge, unlike Stephen Gough, whom he continues to support. Augustus said "I cannot understand why Stephen has to be locked up, how a supposedly civilised society cannot tolerate his eccentric life-style when it is totally harmless."

From a cheeky visit to Brighton's famous Nudist Beach to languishing in a police cell in Redditch, Augustus takes us on his journey of adventure as he tries to find the ultimate prize, the Holy Grail. With the help of Almighty God Himself, a few silly costumes, songs, poems, stories and jokes, he gives the audience his insight into the way to peace and happiness and invites them to join him in that joyful state by getting nude too.

Augustus has long campaigned for the right to be nude and spends as much time naked as he can, when it is warm enough, but he puts some trousers on when his mum visits. Being naked is the most natural, most innocent and most honest way to be, it increases happiness and brings us closer to nature. So Augustus has created this show to bring this message alive.

Three years ago Augustus was a computer programmer, but some people are not suited to the modern way of work, so he gave that up to do something to make himself and other people happy. He writes and performs plays and comedy about his own extraordinary life, with a hint of magic dust sprinkled over it to make it entertaining and hopefully funny.