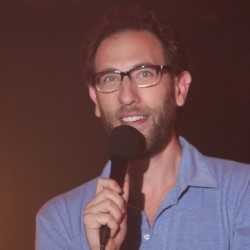 Comedian Ari Shaffir brings his hit Comedy Central storytelling TV series This Is Not Happening to the stage! Nothing is off limits, as Ari brings up some of his favourite comics to tell their favourite, most embarrassing, or just plain funny true-life stories in front of a live audience. 'It's often as cringe-inducing as you'd expect, with Shaffir's banter holding the whole thing together' (AVClub.com). 'Comedy Central's new comic of the moment' (Uproxx.com). 'Ari Shaffir may unseat McConaughey as the hardest working stoner in show business' (Maxim).

US comedian Ari Shaffir will make a UK debut with a stage adaption of his hit Comedy Central story-telling television series This Is Not Happening at the Edinburgh Festival Fringe. Join Shaffir as he invites some of his favourite comic guests to tell their favourite, most embarrassing, or just plain funniest true-life stories in front of a live audience at the Pleasance Ace Dome on weekends this August. Nothing is off limits.

Shaffir flooded Comedy Central's airwaves earlier this year with a one-hour stand-up special Ari Shaffir: Paid Regular, followed by the storytelling stand-up series This Is Not Happening and rounded off with his first one-hour stand-up special Ari Shaffir: Passive Aggressive, adding to a list of multiple television credits including: appearing on Comedy Underground with Dave Attell and Brody Stevens: Enjoy It!, joining the panel as a guest on @midnight (all Comedy Central and featuring on The Green Room with Paul Provenza, Showtime) and Down & Dirty with Jim Norton (HBO).

Throughout the eight-episode series of This Is Not Happening, comedians including Rob Corddry (The Daily Show), Keegan-Michael Key (Parks and Recreation) and Marc Maron (WTF with Marc Maron podcast) were invited to tell their life tales which covered topics including Drugs, Emergencies, Wonder Years, Battles, Romance, and Travel. The show, executive produced by Shaffir, Jeff Tomsic, Eric Abrams and Avalon's Sam Saifer, was met with critical acclaim and due to popular has had a second series commissioned which will be broadcast next year. Shaffir is currently developing a scripted series for FX.

Shaffir performs stand-up to sold out crowds nationwide and has been featured at the prestigious Montreal Just for Laughs Festival, San Francisco SketchFest, SXSW, the Bridgetown Comedy Festival, and the Moontower Comedy and Oddity Festival. His stand-up album Revenge for the Holocaust was released in 2012 and went to number 1 on iTunes and amazon.com the week of its premiere.

In addition to his TV and stand-up projects, Shaffir also hosts the wildly popular podcast The Skeptic Tank, a weekly interview show on which he chats with everyone from parents to comedians "to help better understand humanity and also to make fart jokes." The podcast is consistently among the top-rated podcasts on iTunes and averages over 100,000 downloads per week.