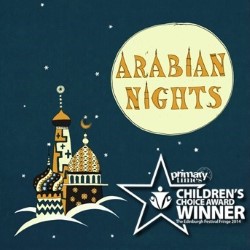 Winner of the 2014 Primary Times Children's Choice Award. Come to a wonderful world of mysterious marvels to meet Sheherazade, the greatest storyteller of all. She has a feast of adventures and fantasies to tell involving genies, villains, heroes and princesses. But can her stories save her life? Will Ali Baba's encounter with the 40 thieves or Aladdin and his lamp help her live to tell more tales such as the Little Beggar or the Fisherman and the Genie? 'Engaging, funny and dynamic storytelling' (Scotsman). 'Fresh-spun and thrilling' (List). 'Not to be missed ... awesome' (Primary Times).

Story Pocket Theatre's adaptation of Arabian Nights features Sheherazade, a Persian queen who has a feast of adventures and fantasies to tell which include genies, villains, heroes and princesses. She has to keep the King entertained with her stories to save her life. Audiences will be transported to a wonderful world of mysterious marvels and tales retold with music, puppetry and theatrical magic. This fast-paced comedy with love, mayhem and storytelling received 4 & 5 star reviews at the Edinburgh Fringe Festival in 2014 and won the Primary Times children's choice award.

Story Pocket Theatre was set up in 2013 from a passion to produce beautiful, wonderful and magical theatre for families. The theatre company's Patron is master storyteller and author of War Horse, Michael Morpurgo. He says 'It was apparent straight away that Story Pocket's focus was on sharing stories in a bright, imaginative way. My passion for stories and writing has taken me all over the world and I am lucky enough to see my stories in print and on stage and screen. It was Story Pocket's passion for story telling that struck me... I am delighted to be the Patron of Story Pocket Theatre Company.'