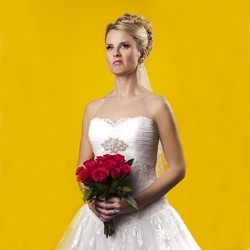 The critically acclaimed character comic, star of ITV2's Bad Bridesmaid and BBC One's Outnumbered, returns after the success of last year's sell-out hit show, Would Like to Thank. Georgina (of Morris's viral YouTube series Georgina's Wedding Blogs) is getting married in Edinburgh and it's got to be perfect. She's having 22 rehearsals first, during the festival, and you are invited! 'Spot-on, darkly comic characters. She's comedy gold' (HuffingtonPost.co.uk). 'Beautifully crafted comedy' (Independent). 'An exceptional comedy performer' **** (Skinny). **** (Stage). **** (Herald). **** (Broadway Baby). **** (Sunday Herald). **** (One4Review.co.uk).

Critically acclaimed comedy actress and writer Anna Morris, brings her most loved Bridezilla character, Georgina Francis, to a highly anticipated climax at this year's fringe: she's finally getting married. In Edinburgh. The star of her viral web series, Georgina's Wedding Blogs, will invite members of the public to attend one of her 22 wedding rehearsals, and help make it PERFECT for the big day on 31st August in Edinburgh Castle.

The rehearsals will take place every day at The Voodoo Rooms.

It's Got To Be Perfect is a high energy, semi-improvised show in which anything can, and will happen. Georgina is on the verge of a wedding-related breakdown. Can the audience help her hold it together? With shambolic attempts at entertaining her guests, outrageous wedding plans, ridiculous rules, crazy commands and audience members roped into playing the most important wedding roles, culminating in a shocking finale, this show promises to be like nothing else on the fringe.

Nothing will get in the way, of Georgina's perfect day...

And now she returns to the fringe with a unique and interactive wedding show, after the success of last year's sell-out Underbelly show, Would Like to Thank, for which she received a plethora of 4-star reviews, toured the UK and was hotly tipped as the next big character comedy star.

After gigging the character for 3 years, gathering a following on the comedy circuit and making a viral web series, Morris brings her engaged Bridezilla character to a climax: she's finally getting married. In Edinburgh... And what better way to make sure everything is perfect, than to rehearse as many times as possible, using the audience as fill-in guests and relatives?!

Anna Morris is a multi-talented comedian, writer and actress. Recent TV credits include BBC1's Outnumbered and BBC1'S Count Arthur Strong. She has written for The Paul O'Grady Show, Man Stroke Woman and Newsrevue, as well as writing her own one-woman multi-character comedy shows including Dolly Mixture and her follow-up show Would Like to Thank, both of which both received critical acclaim at the Edinburgh Fringe and toured the UK.

Anna has her own YouTube channel, which has had over 100,000 hits for her web series Georgina's Wedding Blogs. Last year Anna took the lead in two episodes of smash-hit comedy entertainment show Bad Bridesmaid (ITV2) as Francesca and Daisy. She's recently worked with Claudia Winkleman on a BBC pilot, and will release 4 new wedding blogs in the lead up to the fringe. This is her first one-character show, having previously played 5 characters per show.