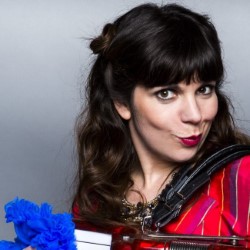 Through her indecorous musical storytelling, Cabaret Roulette's own petite Parisienne powerhouse teaches us everything she knows about love. Which is a lot. Armed with an accordion and a range of vocabulary matched only by her range of silly facial expressions, this adorably twisted individual will enchant, bewilder and disgust in equal measures. 'A piece of degenerative filth that mixes the macabre and the profane and is consequently incredibly funny and the highlight of the evening' (Run-Riot.com).

Anna Lou's Contes D'amour is the debut solo show from London cabaret artist, Anna Lou Larkin. Armed with an accordion and an extensive vocabulary matched only by a baffling range of facial expressions, the French chanteuse Anna Lou will tell you everything she has ever learned about love. This turns out to be quite a lot. And gleaned mainly from a glittering array of outlandish sexual experiences. Winner of a Judge's Award at Mimetic Festival 2014

Anna Lou Larkin is a Glaswegian character actress who has settled in London via Oxford University, Lecoq and (slightly more unusually) the North York Moors. She has been a firm part of the London cabaret scene for the last three years and she continues to be resident performer at London Cabaret Award nominated show Cabaret Roulette (formerly of Madame Jojo's, now of the Royal Vauxhall Tavern) She now hosts regular musical cabaret night Cabaphonic with Finger In the Pie and works throughout the country as a cabaret compere and musical comedian.