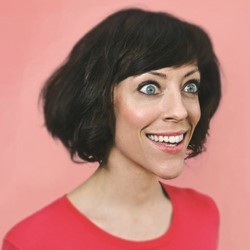 'Comic monster' (Chortle.co.uk) Alison Thea-Skot brings 'mayhem and mischief' (Metro) in this melee of character comedy and nonsense. Thea-Skot will draw you into a world of has-beens and have-nots. Funny Women and Funny's Funny competition finalist, she has made up words with Austentatious and herself around the house. Telegraph's Best of the Fringe, as heard on Radio 4, as seen on BBC2's Culture Show. 'Fun, truly demented character comedy' (Mark Monahan, Telegraph tweet). 'An absolute tour-de-force' (BBC Comedy). 'Comic genius' (Chortle.co.uk). **** (ThreeWeeks). **** (BroadwayBaby.com). **** (Festival Journal).

Hang out with Celine Dion, go on a date with Thea-Skot, join The Heartbreak Club and end on a finale from the 'Woman With Feet For Hands'. Some Like It Thea-Skot is surreal, joyous, unhinged character comedy. Some will like it. Some will love it.

Alison Thea-Skot is a critically acclaimed actress, comedian and improviser. She is currently starring in So On & So Forth's sketch show series for BBC Radio 4 and The Comedy Unit. As an improviser she has performed with Chortle award winners Austentatious: The Improvised Jane Austen Novel and is a member of 5 star improv super group The Free Association, alongside Joseph Morpurgo (Truthmouth, Odessa) and Freya Parker (Lazy Susan).

The Funny Women and Funny's Funny finalist Alison Thea-Skot returns to Edinburgh with a brand new bag of 'delightfully batty' (List) character comedy. Each show is blended together with a dash of improv to make it a little different. Her previous outings have gained rave reviews, been featured on BBC2's Culture Show and were selected as part of The Telegraph's 'Best of the Fringe' and Mervyn Stutter's 'Pick of the Fringe'.

Let Thea-Skot coax you into her world, where ultimately you become the hero. Some Like It Thea-Skot is pure, unadulterated character comedy performed by one of the most exciting comedians on the circuit.