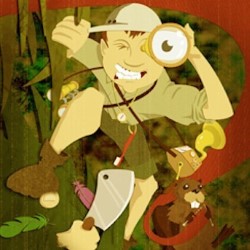 From the author of Alice in Wonderland comes an impossible voyage of an improbable crew to find an imaginary creature! A musical comedy about a ragtag gang of adventurers all trying to catch the Snark, inspired by the poem by Lewis Carroll. Can a Snark be caught with soap? Will the Beaver keep out of the hungry Butcher's way? Will the Baker remember his name? Does anyone even know what a Snark actually looks like? Featuring puppetry, original songs and lots of silliness, this magical comedy adventure will delight, excite and entertain.

The impossible voyage of an improbable crew to find an inconceivable creature.

Enter the imaginative world of Lewis Carroll, author of Alice in Wonderland, in this brand new, highly original, ultra-modern adaptation of the finest Nonsense poem ever written, The Hunting of the Snark. A musical comedy adventure story for the whole family featuring puppetry, lashings of daft humour and an original soundtrack of witty songs that will delight, excite and entertain.

A riotous ragtag band of bold adventurers including the Banker, the Boy, the Butcher, the Baker, Mr Bellman and his knitting Beaver set off on a quest to catch the Snark - and of course, the Jub Jub bird, the sly thieving Bandersnatch and the dastardly Boojum... But does anyone know what a Snark actually looks like? And will the Boy be able to reconnect with his father?