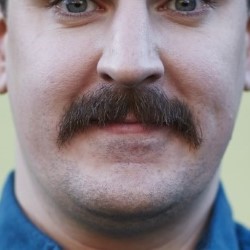 Brice is back with a host of silly characters. Eric Meat is heartbroken, can't cook spaghetti, and out to do what he wants. Join him as he tries to find out exactly who he is. It could be disastrous. It will definitely be ridiculous. Come, join the fun! Be sure to bring your frog hats! 'Joyously bonkers ... the perfect level of exaggerated oddness without tipping into the self-indulgent' **** (Chortle.co.uk). 'A twinkle-eyed, moustachioed comedy natural' ***** (ShortCom.co.uk). 'Completely bizarre... deadpan, yet totally off the wall' **** (ThreeWeeks).

Ali Brice returns to the Fringe this year with his brand new show Eric Meat has No Proof Only Memories Of Pasta. He brings to the stage the character of Eric Meat for his second full hour, after 2014's brilliantly anarchic Eric Meat Wants To Go Shopping. This will also include a host of other wonderful silly characters.

Eric Meat is heartbroken, can't cook spaghetti, and out to do what he wants. He sets up a detective agency to look for clues as to why his relationship has failed, simultaneously trying to discover exactly who he is. It could be disastrous. It will definitely be ridiculous. Be sure to bring your frog hats!

Ali has a natural flair for exaggerated, ridiculous yet heartfelt character comedy and spritely audience interaction. Best known for his work with alternative troupe Weirdos Comedy, a troupe of like-minded performers that contains the best of London's up-and-coming alternative comedians, including John Kearns, Pat Cahill, and Ben Target...among many others.

Ali has been going from strength to strength with his barmy solo show, and his onstage antics have become even more ridiculous. A disciple of alternative comedy, Ali is looking to follow the greats, The Goons, Harry Hill, Vic and Bob, The Mighty Boosh, The League of Gentleman. And Joe Pasquale. He also has a moustache and very funny face.