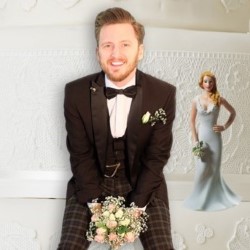 Have you ever felt that perhaps you have too much money? That the money you have set aside for a house, a car or that kidney transplant a doctor has told you that you critically need, could be put to better use? Perhaps it could be better spent making someone else's hand worth more than most people's car? Well then perhaps you, like Alex, have recently decided to get engaged. Stand-up, Huffington Post columnist and You and Your Wedding magazine's resident groom Alex Smith takes you on his wedding journey.