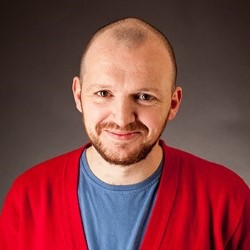 Winner of So You Think You're Funny? 2014, Irish musical comedian Aidan Strangeman is his kids' favourite superhero. Can he grow up before they do? Aidan and his comedy songs have previously featured in the theatre show Singlehood which has played to thousands of people in some of Ireland's largest venues, including the Olympia and Vicar Street. 'Hilarious' (Irish Times). 'A laugh out loud crowd pleaser' (Examiner.com). 'Great, catchy, original musical numbers' (Journal.ie). 'Surely destined for bigger things' (Bruce Dessau). 'One of our new favourite musical comedians, so worth checking out' (Abandoman).

This is an hour of musical comedy and stand-up about my life so far from teenage inexperience through marital compromises, infertility, eventual fatherhood and the challenges of family life.

I'm a long-time musician and songwriter but a relative newcomer to comedy. I was delighted to be offered the opportunity to bring my debut comedy show Horsey to The Gilded Balloon after winning So You Think You're Funny in 2014.

My background is primarily in music, and I always try to make my songs as catchy as they are funny. I wrote comedy songs for, and performed in, the Irish theatre show Singlehood (2012 to 2014) which played in some of Ireland's biggest theatre venues, including Vicar Street and The Olympia, and had a Nationwide tour.

I am also currently involved in writing a new show with the Singlehood production company which will preview this year in the Dublin Theatre festival. I spent a week with the National Theatre UK in 2014 work-shopping that show.

I live in Ashbourne, County Meath, Ireland (I'm originally from a town called Carlow) with my wife and two kids, and I have a full time job as an engineering draughtsperson in Dublin. As a part-time stand-up I've performed in all of Ireland's major venues. I'll be heading to Montreal for the Just For Laughs festival in July and I'm also taking part in the Dublin Vodafone Comedy Festival.

I'm hoping the show gets reviewed well in Edinburgh and that it will be a stepping stone to a career in stand-up or musical theatre or both.