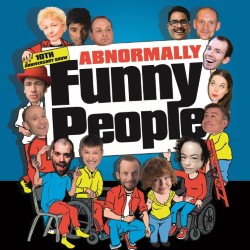 They're back! Abnormally Funny People are 10 years old. Their brand new show will have different comedians every night. Each one will be packed with top notch stand-up, silly songs and a splash of improvisation. All the acts have a disability, except for the token non-disabled one. It's all about inclusion! Produced by Steve Best and Simon Minty, creative advisor Lee Simpson, Comedy Store Players / Improbable Theatre.

Abnormally Funny People are returning to where it all started at the Edinburgh Festival Fringe for a 10th anniversary show. Reuniting some of the original line up alongside new comedians, it's a blend of youth and experience!

The new Abnormally Funny People Show is a showcase of talent packed with top notch stand-up, variety acts, ridiculous songs and improvisation. All of the acts have a disability but the type of humour varies from act to act. Oh, and there's a token non-disabled one too (for the sake of inclusion).

Produced by group co-founders Steve Best and Simon Minty, with help from Lee Simpson (Comedy Store Players), each night features a varied ensemble from their roster of accomplished acts. The group premiered their ground breaking show during the 2005 Fringe to shining reviews and packed audiences. A decade later, they're perhaps still the only show of its kind.

Simon Minty says "Our message is this: there is no message. Just don't call us inspirational or educational. Disability and comedy has grown over the last ten years but it's not mainstream yet so we're accidentally still alternative."

Steve Best says "Abnormally Funny People has always been about making audiences laugh we laugh at ourselves and the way the public misperceives disability. Humour is a powerful medium and we offer something irreverent and entertaining."

Some of the acts appearing in the run include Lost Voice Guy (winner BBC New Comedy Award 2014), Tanyalee Davis (The John Bishop Show), Laurence Clark (Shortlist Britain's Funniest New Comedians) and Juliette Burton (2014 Fringe 5 star act Look At Me). Later in the run sets will include Liz Carr (BBC's Silent Witness), Gareth Berliner (Coronation Street), and Touretteshero ('An adventure in every way'- The Guardian) to name just a few.