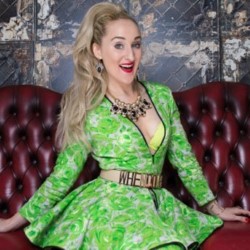 One-woman comedy character show, written and performed by Abbie Murphy. The Girl on Fire from Edinburgh Fringe Festival 2014 is back with a bang! 'Laugh aloud funny' - praise from Steve Bennett (Chortle.co.uk) for her debut show. Abbie Murphy has returned with Miss Stephanie Vange! With a lot of wit, and misplaced confidence the lovable Essex girl shares her side of the story...

Abbie Murphy returns to the Fringe this year with the vivacious, deluded and undeniably hilarious Essex babe, Stephanie Vange in new show Have A Word.

During last year's sell out debut show Girl on Fire, we saw Vange move back in with her parents with little prospects of money or love. Now, Vange plans to launch back into the world!! Expect bulletproof flirt advice and emerging new talents as she dominates the stage once more. You will very likely know someone just like her... if you don't, maybe it's you?!!

Abbie Murphy is a dancer turned comedian who wrote and performed her Edinburgh debut just 6 months after deciding to take the leap into comedy from her dancing role in Bafta nominated BBC 3 production, Bollywood Carmen. The debut was an incredible success and Murphy has since become a regular on the comedy circuit in London, performing in line ups with Birthday Girls, Joe Lycett and Aisling Bea. Also gaining herself TV credits in Miranda BBC1, Pompidou BBC2, plus new comedy series for UKTV Marley's Ghosts and has additionally been cast in a comedy pilot for NBC.

Have A Word is executive produced by Derek and Pompidou producer Charlie Hanson with whom Murphy is currently developing the Vange TV sitcom.