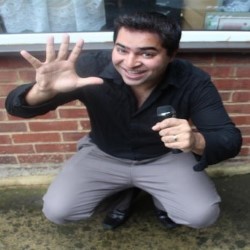 Can comedy change Western misconceptions about Islam? Join Aatif as he makes his Edinburgh Fringe debut with a show that drew critical acclaim and packed houses to the Leicester Square Theatre in London. 'Sixty minutes or so zips by, as a room full of strangers is transformed by Aatif's jokes and generosity, into a room full of friends' (BroadwayWorld.com).

A follow up to Aatif's sell-out debut show, Talk Roti To Me, Muslims Do It Five Times A Day explores the both contentious, and often hilarious, relationship between the 5 million UK Muslims and non-Muslims. It tackles some of the heavier issues around the Muslim world (i.e. Gaza, Syria, Iraq) while occasionally letting the audience off the hook.

The hope is the show will help to build bridges between cultures and demonstrate that the gap between Islamic comedy and mainstream comedy is...well...very narrow!

Aatif Nawaz is an award-winning British-Pakistani filmmaker and stand-up comedian. He has quickly become one of the most popular British-Asian comics in the UK. He's performed around the world alongside the likes of Shazia Mirza, Omid Djalili amongst other comedy veterans. A trained actor, Aatif has also made appearances in several commercials and radio and television shows. He has had small roles in Mark Austin's Real Crime and Peep Show and has recently appeared on Stephen Fry's English Delight on BBC Radio 4. As a bilingual actor, Aatif has also appeared in the Urdu-language series Lehrein and the film Majboor. He also wrote, directed and starred in the Urdu television series Bahir Waalay.
In 2012, Aatif won an Honourable Mention Laurel at the Los Angeles Movie Awards for his documentary Postcards from Lahore. The film also holds the distinction of being the only Pakistani film to be screened at the 2013 Cannes Film Festival.

Over the last six months Aatif has been presenting the Islam Channel's flagship lifestyle programme, Living The Life, for which he received a nomination for a MOMO (Music of Muslim Orientation). Muslims Do It Five Times A Day features some of his experiences on the show, such as encounters with organisations like Britain First, the BNP and of course...atheist fundamentalists!