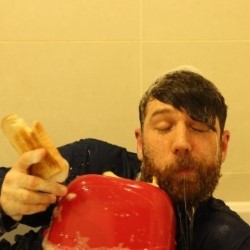 We fell side by side, Vincent and I, like two eggs from a tabletop. For 40 falling stories, Vincent shared his story. It was awful, disgusting and really funny. I'd like to tell it to you. Co-creator of The Lounge Room Confabulators (winner of the Underbelly Edinburgh Award 2011), the sole idiot behind A Night to Dismember (runner-up Best Comedy and Best Comedy Performer Auckland Fringe 2013) presents a stupid new study of guilt, grief and gravity. A bounding comedy for your bitter heart. An awful story, beautifully told.