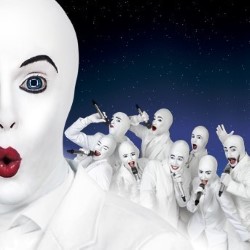 Voca People is a thrilling and original musical adventure unlike anything you experienced before! Full of energy and bursting with comedy and fun, this international hit features more than 80 all time favourite hits including Madonna, Michael Jackson and even Mozart! No instruments, no sound effects - just eight incredible, talented singer-comedians. Seen by over 1 million viewers worldwide, over 50 million YouTube hits. 'Great. A knockout' (New York Times). 'The coolest show ever!' (Jimmy Fallon). 'The harmonies are otherworldly!' (Time Out, New York). Winner of New York City Lortel award for Best Theatrical Experience, 2012.

The Voca People will make their UK debut at the Edinburgh Festival Fringe in 2014, with a thrilling and original musical comedy sensation already seen by over 1 million viewers worldwide.

With over 50 million YouTube hits to their name, the Voca People use no musical instruments and produce all sounds live combining a-cappella and modern beat-box techniques. Full of energy and bursting with comedy and fun, this international phenomenon features more than 80 all-time favourite hits from Madonna to Michael Jackson via Mozart! No instruments, no sound effects - just eight incredible, talented singer-comedians.

The award-winning show has already enjoyed tremendous success worldwide; within four years it has had sold out tours through Europe, North and South Americas and the Far East, and spent over a year performing on Off Broadway - NYC, where it won the Lucille Lortel award for 'Outstanding Theatrical Experience'.

The Voca People's spaceship has crashed on an unknown planet - Earth... The ship's charger runs on one energy source only - MUSIC - so the Voca People must meet the Earth's inhabitants in order to learn their strange habits and music and, with the help of the audience, musically energize their unique spaceship...