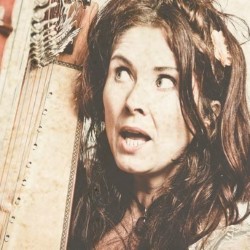 Belfast Songstress Ursula Burns is the most dangerous harpist in the world. She fell into funny-land by accidentally winning her first award in 2012. Her first trip to Edinburgh Fringe Festival saw her nominated for more, based on her comic originality. She has been performing all her life in music and theatre and has run away to join the circus more times than most of us have had hot dinners! 'Funny and enchanting in equal measure with a lilting voice that makes the falls road sound like Brigadoon' (Kate Copstick).