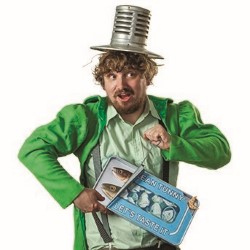 Mr.Twonkey has this to say about his new show: "Before the Internet on days out in Whitby I would have a lot of fun playing with the fish and chip paper making a vinegar mask. I would spend all my pocket money on a huge bottle of vinegar and sock the mask. Meanwhile under the coarse damp paper my face was beetroot red and aggravated. The sea serpents would circle like vultures hungry for fish and chips. That's when I had the idea that I would love to run my own restaurant called 'The Salivating Sea Serpent'. So here we are and we've got soup of the mouth and catch of the fortnight. We are busy as corpse opening times only when we are feeling cheeky."

The Lovechild of Brian Blessed and Betty Boop gives you his new tasty vision.

Mr. Twonkey AKA Paul Vickers is mad as cricket bat and fast as a silver hare. Its surreal act of twisted songs, adult fairytales and games that feature elaborate props. His goal is to mix funny anecdotes and heartfelt moments creating an enjoyable uniquely Twonkey vision of a better world. Twonkey is fresh from the Soho Theatre and as well as appearing on Arthur Smith's Radio 4 Extra show.

A few words about the man Broadway Baby described "an absolute loon of a comedian": Paul Vickers aka Mr. Twonkey fronted the cult rock act Dawn of the Replicants' for ten years, releasing five studio albums and recording five John Peel sessions for Radio One. Live credits include Glastonbury, Reading, T in the Park and South-by-South West in Austin Texas. D.O.T.R tracks have been aired on daytime Radio One and playlisted on BBC6 music and XFM. In 1997 the band where named most promising new act by The Times newspaper and in 1998 were nominated for an N.M.E brat award.

Since these heady days Paul has kept his hand in, recording albums with new project Paul Vickers and The Leg and critical acclaim has been a constant as well as support from local and national radio.