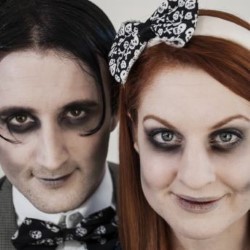 Last seen on BBC Three's Live at the Electric and after a run of sell-out seances across London, child psychics Maurice and Ivy Macabre are wanted by police following a string of horrific murders. Dare to witness the infamous siblings as they conjure the souls of the damned through twisted sketches and songs. A deliciously dark character comedy sideshow that will kill you... literally. Buy a ticket today or they'll cut you. 'Séancesational' (Daily Impale). 'Please! No, not my toes' (A man held at knife-point).