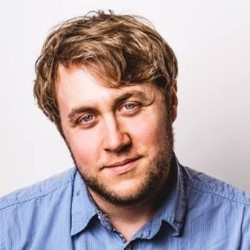 Prequel is a frolicsome and poignant stand-up show from hotly tipped lovely lad Tom Toal (Eye Spy, Channel 4). A show full of quirky gags, memorable stories and a miracle that not even the T-Dawg could have foreseen. 'Funny and touching ... humour from the heart' (ThreeWeeks). 'One of the most promising of today's emerging comics' (Steve Bennett, Chortle.co.uk). Runner up Loaded LAFTA's Search for a Star. 'Toal's ease of interacting with the audience is a true talent' (Hairline.org.uk). Pleasance Comedy Reserve 2013. AAA Stand-up 2012.

There's a first time for everything, and Tom Toal is fittingly using the occasion of his first full-length Fringe show to talk about firsts in his own life - be that his first speech, first stage performance or first...fill in the blank yourself. But first thing's first: it's about comedy, and Tom has had no shortage of that in his life.

Tom's show about "childhood, fatherhood and moving out of the hood", and how his experiences have shaped his personality. He examines the way a series of moments can forge the paths we take, and how these changes cause us to look at life in a different way.

Hailing from Bexleyheath in South East London Tom has made his name on the stand-up circuit with his candid, warts-and-all shows such as On The Scrapheap and Rom-Coms And Revolutions. Both achieved widespread acclaim and good reviews, with the latter playing to a complete sell-out audience for the full run. Tom was also Loaded Laftas Search For A Star runner-up (2011). At last year's Festival Tom performed as part of the prestigious Pleasance Comedy Reserve.