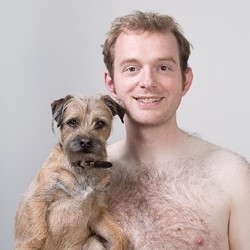 This beguiling and hilarious posh Welsh stand-up returns to Edinburgh after his 2011 sell-out run. A lot's happened since then. Older, balder and louder than ever, he now has a beautiful and perfect son who even has the same huge head and big cuddly face. So how can Tom make sure his spawn doesn't become a bleak flinty git like him? Multiple award-winning Tom Price needs your help to stop being a spiteful cock, for the good of the human race. "A joy to behold" **** (List). "Excellent" **** (Scotsman).

Tom Price Is Not As Nice As He Looks is the hilarious new show from much loved comic, Tom Price (Torchwood, Secret Diary of a Call Girl, Stella, Count Arthur Strong, Episodes).

An anecdotal masterclass, this feel good show is fast becoming a must-see at this year's fringe. The surprise ending in which Tom plays cupid is certainly fuelling post show conversation - and, it transpires, may even have been successful in sparking off some post-show romance amongst audience members so it turns out!

The show is about that person we've all got inside us. That stubborn, belligerent and spiteful child scarcely hidden from public view. The person who got arrested on London Bridge because he wouldn't take his plastic hat off; the one who made Clive Anderson cry; the one who dumped someone at a wedding: Him.

It's time for Tom to accept he's not as nice as he looks, and work out how to avoid his baby son becoming a bit of a cock too.

In an attempt to atone for one of his numerous wedding-based misdemeanours, Tom re-stages a wedding ceremony, marrying two unsuspecting members of his audience nightly.

Tom Price is an in demand stand-up, radio presenter and actor. Credits include: Torchwood, Secret Diary of a Call Girl, Stella and Count Arthur Strong. Tom is due to commence filming for the BBC's Episodes and his BBC Radio Wales comedy news show The Leak kicks off in September.

He is the series warm-up for Have I Got News For You and will also be supporting Stephen Merchant on his European Tour later this year.

The show is directed by Rohan Acharya who's directorial credits include Isy Suttie's Love Letters (for which he received the Sony Radio Academy Award), Go 8-Bit and the Perrier award-winning Brendon Burns' show So I Suppose This Is Offensive Now.