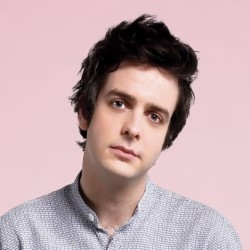 Award-winning comedian, writer, and one third of critically-acclaimed sketch group Jigsaw, Tom Craine returns to the Edinburgh Festival Fringe this August with his brand new solo show, Thoughts On Love (By A Man With None Of The Answers). After being held as a suspected terrorist at an airport for six hours, Tom found himself with time to clarify his ideas on relationships. Find out how the Cosmopolitan magazine 'Sex and the Single Guy' columnist wound up at the eye of the storm during his quest to unearth the reasons behind the cultural panic that exist around being single today.

As part of the very highly regarded sketch trio Jigsaw (alongside Dan Antopolski and Nat Luurtsema), Tom has recently finished writing the second series of the self-titled Jigsaw for BBC Radio 4. Jigsaw were ranked as one of GQ's Top 100 Best Things In The World 2012.