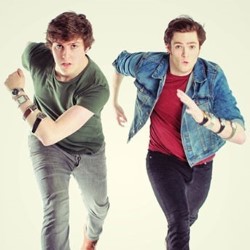 Following last year's critically acclaimed debut, New Act of the Year finalists and sketch duo Thünderbards (Glenn Moore and Matt Stevens) return with their second hour of comedy. After giving up on conventional sketch writing, the boys are free to pursue their real interest: time-travel. See them traverse the decades to find out a little more about their ancestors, which is all very well. It's when they begin to meddle with the future that things get complicated... 'Without question one of the funniest sketch shows on the Fringe' (GQ). 'Brilliantly performed and hysterically written' **** (List).

London Sketchfest's 2013 Runners-Up and 'New Act of The Year' Finalists 2014 Thunderbards are set to return to the Edinburgh Festival Pleasance Courtyard with their second hour of incredible sketch comedy entitled 'Seconds'. The sketch duo, comprised of Glenn Moore and Matt Stevens, have thrown caution to the wind and are now pursuing their real interest; Time Travel.

Set in the present day Edinburgh 2014, Seconds follows Glenn on his eternal quest to learn how to flirt with women - under Matt's expert guidance. Thünderbards use their 'time watches' to soar through the decades to find out a little bit more about their ancestors, what made them 'tick' and why they were useless at ... well just about everything they seemed to put their hands to.

This nostalgia for the past is all very well. However, it's when they begin to meddle with the future, that's when things really start to get complicated...Expect a journey of twists, turns, hilarity and the impending dangers of Time Travel!

Outside Thunderbards, Glenn has frequently appeared on the stand-up circuit after earning praise for his material as a newcomer. He was also runner up in the 2011 Chortle Student Comedy competition and a finalist in the 2012 Foster's So You Think You're Funny competition. Similarly, Matt is also an experienced improvisational comedian and regularly performs with the London-based improv group Do Not Adjust Your Stage who embarked on a European tour in 2013, including festivals in Barcelona and Dublin.