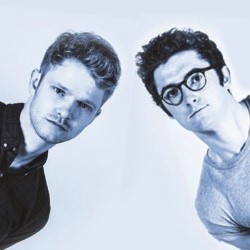 The Pin are Ben Ashenden and Alex Owen. They had two sold out runs at the Fringe in 2012 and 2013, won the award for Best Show at the 2013 London Sketchfest and there's a slim chance you'll have seen them knocking around on BBC Three, ITV and Channel 4. Now they're back with an hour of guff. 'So sharply written; this duo can go far' (Telegraph). 'Heavily tipped for future stardom' (Guardian). 'Book it now' (Sunday Times).

The Pin are a comedy double-act comprised of Ben Ashenden and Alex Owen. They had fringe sell-out runs in 2012 and 2013. They also won the "Best Show" award at the 2013 London SketchFest, and had a hugely successful sell out run at The Soho Theatre earlier this year, with an added date due to popular demand. They've appeared on BBC Three, ITV and Channel 4, and now they return to Edinburgh with an hour of friendly guff.

As a youngster Ben was very almost a professional rugby player, and seriously considered a career in the army (which just goes to show, you never know how life is going to turn out). Ben was a member of the Chicken Shed theatre company as a young lad, and has filmed a lead role in the pilot episode of a studio sitcom called Mummy's Boys for Comedy Central. He's also performed in the BBC Three pilot of Kerry Howard's sketch show The Kerry Howard Show, and has previously played a lead role in the pilot episode of sitcom Tom and Jenny, also for BBC Three. Other appearances include BBC Threes Siblings and Channel 4's Scrotal Recall.

When Alex was a youngster he wanted to be an actor (which just goes to show, sometimes you can guess how life might turn out). He has appeared in feature film Molly Moon-the Incredible Hypnotist, for Amber Entertainment, played the young Rupert Penry-Jones in ITV drama series The Last Weekend, and was a gothic villain in Midsomer Murders. Recently he's appeared in BBC Three sitcom pilot Rudeboys and series one and two of Crackanory.

Hotly tipped to be the breakthrough act of this year, catch The Pin now in the early stages.