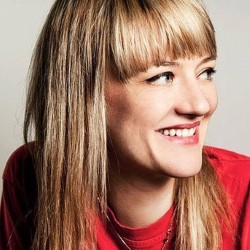 This is the hotly anticipated and hilarious new show from Tania Edwards: stand up comedian (BBC1, Radio 4), and writer (Mock the Week, BBC2, Stand Up For The Week, Channel 4). Tania was a finalist in the Hackney Empire, Amused Moose, Leicester Square, Latitude, and Funny Women competitions. 'Akin to a female Simon Evans... a bit posh and something of a sociopath... fantastically seamy side to the material... also great with audience banter... sublime... brilliant' (Chortle.co.uk). 'Very punchy stand up and her banter with the audience is incredibly quick' (ThreeWeeks). 'Star of the future' (SW Magazine).

Tania is the first to admit that she’s always right. But what does the truth mean in a world where any opinion can thrive? It’s all very well being the champion, but what has she won exactly?

Tania is a stand-up comic (BBC1, Radio 4) and writer (credits include Stand Up For The Week, Twit of the Year, Channel 4). She was a finalist in the Hackney Empire, Amused Moose, Leicester Square, Latitude Festival and Funny Women competitions.