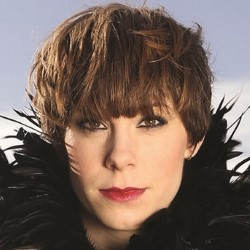 Suzi Ruffell returns to Edinburgh with her brand new show Social Chameleon. It's really hard trying to be liked by everyone and keep everyone happy. After years of bending and breaking Suzi finally got some back bone. 'This is what talent looks like before it hits big' (LondonIsFunny.com). As heard on BBC Radio 1's Lolz Lounge, BBC Radio 4, seen on BBC Three's Ed Fest Live, Comedy Central's Live From The Comedy Store and on tour supporting Alan Carr, Josh Widdicombe and Kevin Bridges. 'A stand-up gem' (Guardian).

Fresh from supporting some of the UK's top comedians on their sold out tours including Channel 4's Chatty Man, Alan Carr, star of The Last Leg, Josh Widdicombe and Scotland's finest, Kevin Bridges, Suzi Ruffell, returns to Edinburgh this summer with her hotly anticipated second show Social Chameleon. In it the 'stand-up gem' (The Guardian) questions why she spent 27 years trying to make anyone and everyone like her. Turns outs it takes a fat bully from Swansea, a too-honest mother and searching a Parisian graveyard for someone she has never heard of to give up trying and just be herself and yes we are all hoping she hasn't turned out to be a dickhead. **This show may contain traces of rapping.

Suzi will be performing to audiences throughout the festival at the Assembly George Square Studios Four at 6:35pm.

In the short time she has been performing she has notched up several radio and TV credits including; Edinburgh Comedy Fest Live (BBC Three), Live at the Comedy Store (Comedy Central), LOLz Lounge (Radio 1), as well as numerous appearances on Radio 4. Suzi has also made it to the finals of Leicester Mercury Comedian of the Year nominee and Latitude New Act of the Year finalist.

Tipped as 'one to watch' by Time Out it can only be a matter of time before this enchanting young performer begins to make a huge impact on the comedy world.