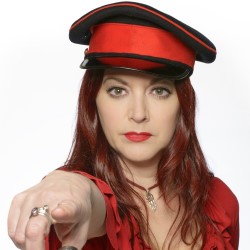 First rule of F*ckwit Club; nobody knows why they're in F*ckwit Club. I haven't worked out the other rules yet. Everybody's been a fuckwit at some point in their life. Ever lost your glasses while wearing them? Driven the wrong way down a one way street? Dumped someone by text? If so we want you for F*ckwit Club. 'Cynicism that could fell a rhino at 1,000 paces. Like it' (Al Murray). 'Susan Murray's baffled everywoman persona cloaks a dry, intelligent wit' (Stewart Lee). 'Honest and crafty, it's clear Susan can be fearlessly confrontational' **** (BroadwayBaby.com).

First rule of F*ckwit Club - Nobody knows WHY they're in F*ckwit Club. Susan hasn't worked out the other rules but the entry requirements seem to be many and varied. Here are some examples: Susan's local dry cleaners took it upon themselves to attach a rather hideous leopard print collar to her £200 parka when she took it in for a simple clean. They were obviously rewarded with membership. And there was Susan's mum who diligently watered a plant every day for six months before realising it was plastic. She was became a member. And then there's Susan of course.

Susan lost three sets of house keys in the space of 48 hours. Naturally, she joined up. Everybody's been a fuckwit at some point in their life. Ever lost your glasses while wearing them? Driven the wrong way down a one-way street? Dumped someone by text? If so, Susan wants YOU for F*ckwit Club.

This August, Susan, returns to the Edinburgh and this time it's serious. In Susan Murray's F*ckwit Club the Scots Brummie lass with attitude embarks on a whirlwind confession of all the things, situations and most of all people who exacerbate her frustrations as she fights against the onset of middle-age, ticks in her belly button and the annoying individuals she encounters on an increasingly frequent basis. Offering a non-exclusive membership policy, Susan Murray's F*ckwit Club has a growing membership and anyone who doesn't come to her show at Liquid Room Annex will be given awarded membership. And if you think you can book in advance, well then you're a fuckwit too, it's just walk up.

A veteran of the comedy circuit, Susan won the first ever Jongleurs new act competition and is now headlining gigs for them. She works regularly for every comedy promoter in the UK and is fresh from a three-week tour of South East Asia. Susan has just recently been a guest on Stephen K Amos' Idiots Guide on Radio 4 and has just played God's wife in The God Racket rehearsed reading at Birmingham Rep. She also wrote additional material for the new hit Sex In The Suburbs at the Royal Court Liverpool. Susan is a regular contributor to an array of Radio 4 comedy shows including The Now Show, The News Quiz and Newsjack and is the first woman to MC decompression gigs for the British Army.

Susan not only runs her own comedy night in Walthamstowinnit, she also teaches at her comedy school in Brighton. She is the brains behind and organiser of the UK's Comedians' Annual Christmas Party every January.