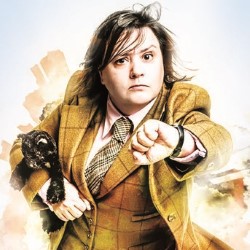 Susan's back at the Fringe with a brand new show. If you've seen her before, Lady Like is a reassuring hour spent with the woman her neighbours call 'the mad cat lady'. If you don't know who she is, the show will definitely make you feel better about your own life. The show's about a lot of things, but it's best not to spoil the surprise. Comedy from Calman, as seen and heard on QI, The News Quiz, Calman is Convicted, HIGNFY, Fresh Meat and Would I Lie To You. 'Confident, compact ... cracking.' (Evening Standard).

She's petite, Glaswegian, likes cats and - if she is to be believed - at one time collected thimbles. But such descriptions do little to describe the full power of Susan Calman, who returns to Edinburgh with a continuation of the 'lady' theme she's tended to favour at the festival.

Lady Like is a chance to spend an hour with the woman known as "The Mad Cat Lady" to her neighbours, and Calman promises to reassure you, make you feel better about your own life and let you find out what being lady-like really means. How will she do this? With anecdotes, observations and no-holds-barred honesty of course, such is the manner of the feisty scot The Times called a "diminutive lesbian" with "chirpy, optimistic level-headedness."

But Susan has a confession to make, and it's a heart-warming one. Through plunging to life's lowest depths she has, fortunately, come out the other end and wants to share her story. The show is, above all, a call to like ourselves no matter what others say; a journey of self-awareness, self-discovery and - here's the fun bit - self-indulgence. Indeed, as the lady says: "All of us have mental health issues, it's just that for some of us, our issues make us go more mental than others".

Since studying law at Glasgow University and going on to work in the field (including a stint working with death row inmates in the US), Susan Calman turned to comedy and gained her first success by reaching the semi-finals of the BBC New Comedy Awards in 2005. Since then she has appeared on QI, Would I Lie To You?, Rab C. Nesbitt, BBC Radio 4's The News Quiz, CBBC's Extreme School and Channel 4's Blowout, which won a Scottish BAFTA in 2007. She also won the Best MC Chortle Award 2012, and Best New Scottish Comedian at the Real Radio Scottish Variety Awards in 2009.

This summer Susan will present Don't Drop The Baton, a BBC comedy broadcast during the Glasgow Commonwealth Games in July and August, and STV quiz show The Lie, which started broadcasting on March 31. Susan Calman Is Convicted, a BBC Radio 4 series exploring issues the comic feels strongly about, started on April 2. Her stand-up tour Lady Like will tour the UK and Ireland in Autumn 2014.