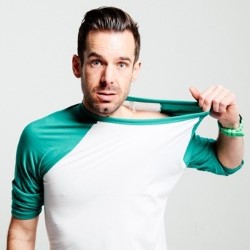 What is a Simon Feilder? Award-winning comedian? Sure. Kisswizard? Campingman? Fightsmith? LET'S FIND OUT. His debut solo show at the Fringe will feature a delightful deluge of jokes, jingles, video, sounds, online dating, urinals and fun-size confectionery plus one joke about Freud. Do come. Mums welcome.

Simon first burst onto our screens on Channels 4's The Big Breakfast and since diving headlong into the world of stand-up comedy, has performed and compered everywhere from The Comedy Store to Sonisphere in lands as far flung as New York and Guernsey. Simon has previously performed at the Fringe as half of the critically acclaimed comedy duo Life of Si and has produced an array of shorts on his own successful YouTube channel.

All the Things I'm Not is quite literally a show about all the things that Simon is not. Each is illustrated with sounds, diagrams, videos and other shiny distractions (lest you tire of his whimsical wittering). The show purportedly contains 'no learning' but SPOILER ALERT: he only goes and ends up learning about himself.
Also there is rapping.