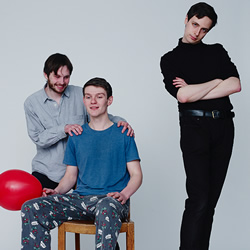 Funny trio Sheeps preview their forthcoming Wembley show. 'Just turn up, sit back and laugh' ***** (Edinburgh Festival Magazine). 'Something quite different and very exciting indeed' **** (Independent). 'One of the most exciting sketch acts to emerge in years' **** (Time Out). 'It is, by some enormous distance, the most exciting, the most intelligent, the most p**s-yourself-funny hour on this or any other Fringe. They are just: That. Damn. Good' (A Gazette). #sheeps_EddyFringe_2014_show

It's 2014. Sheeps are still Daran Johnson, Liam Williams, and Alastair Roberts. Against all odds, they have been booked to appear at Wembley Stadium and in Wembley Previews they are preparing their greatest sketch for the gig of their lives...

Sheeps return to the Fringe with a renewed focus on character and an element of surprise in an unusual venue for comedy. Wembley Previews is the show they have always hinted at being capable of; set to elevate the group to one of the most creative ensembles the Fringe has ever seen.

The trio are at loggerheads, firmly positioned at the extreme end of each other's tethers. Liam, masquerading as the group's pragmatist, is Sheeps' self-appointed guileless autocrat. Alastair, every bit the misguided thesp, operates at the other end of the creative spectrum- an indulgent purveyor of extravagant flourish. Both as pig-headed and irresolute as the other, the two bicker over wholesale changes and stylistic minutiae; an hour-long attritional war-of-words.

And in Jonno (Daran Johnson) we have our loveable anti-hero. Apprehensive, gormless, and brilliantly impressionable, Jonno holds the deciding vote, and is therefore the de facto kingpin in Liam and Alastair's nonsensical struggle. As Wembley Previews rips along - with each version of Sheeps' sketch more absurd than the last - Jonno realises his influence and begins to pull the strings...

The trio began performing together as members of the world-renowned Cambridge Footlights. At last year's Fringe Liam Williams was nominated for Best Newcomer at the Edinburgh Comedy Awards for his self-titled solo debut. Earlier this year, Daran Johnson wrote on BBC Three's Siblings, and has a number of projects in development with major television production companies. Alastair Roberts has appeared in a number of programmes and pilots for BBC Three, as well as recently starring in a short film with Julia Davis.