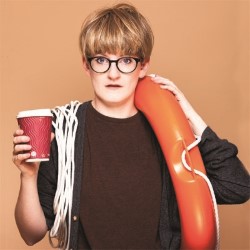 Have you been mis-sold PPI? Me neither. Feel a bit left out tbh. My friend got seven grand! Anyway: mind-blowing stand-up about nagging anxieties from the Radio 4 and Russell Howard's Good News writer. Featured on Radio 4's Fresh From The Fringe. 'Hugely talented' (Time Out). 'Very funny" (Guardian). 'One of the stand-out stand-ups of the future' (Comedy.co.uk).

Following her Edinburgh Fringe debut last year Isn't it Fun?, Sarah appeared on BBC Radio 4's Fresh from the Fringe. As neurotic as she is quick witted, Sarah's unique brand of sharp observational comedy paired with her charming conversational style mean she's definitely one to watch.

Don't Worry Guys It's Sarah Campbell will be mostly about nagging anxiety, but don't worry about it! Sarah will also be chatting about learning about penises as a 30 year-old lesbian, doing Zimbio 'which character are you?' quizzes, trying to make people feel better about themselves on the internet and the word cocksucker.

When she's not being mistaken for a 12 year old boy, Sarah writes for BBC Three's Russell Howard's Good News, and has written jokes for Have I Got News For You (BBC One), ITV's I'm A Celebrity Get Me Out of Here Now, and sketches for Radio 4's Newsjack and Dead Ringers. Sarah also writes and performs sketches for BBC Comedy Online and The Poke. Her acting credits include Live at the Electric (BBC Three), Daniel Simonson's comedy blaps (Channel 4 online) and plays as Mila Kunis's gynaecological nurse in the upcoming movie Jupiter Ascending. This Autumn, Sarah can be seen doing her best to ruin a hen party in brand new ITV2 show Bad Bridesmaid.