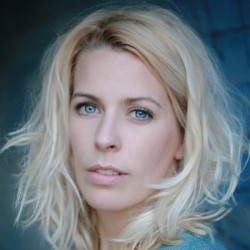 The past contains wars, witches, Kim Yong-Il and your ex. Your brain can recall being a child, while your body remembers being a monkey. Everything that has happened shapes who we are today ... does free will even exist? Who cares! Miss Pascoe is here to amuse us with her joking! 'An exhilarating, deeply satisfying show' (Times). 'Nothing less than full mega-watt charisma' (Guardian). 'Always clever and sometimes exquisite' (Independent). Sara's TV history includes QI, Twenty Twelve, Campus, Stand Up For The Week, Never Mind The Buzzcocks and Live At The Apollo.

Star of The Thick Of It, Twenty Twelve, QI and Live at the Apollo and Chortle Breakthrough Act 2014 Sara Pascoe returns with a brand new show. Having tackled the truth and the flexible material of reality last year, August 2014 finds Sara being reflective and examining how we are affected by what precedes us. The show is a combination of anthropological research and over-sharing, and a comedic insight into love and gender. Stormed the Fringe 2013 with four and five star reviews throughout, and will embark on her first national tour in Winter 2014.