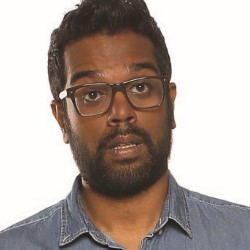 Romesh Ranganathan is an inadequate human being. He is trying to improve himself. He is reading self-help books, watching documentaries and delivering witty repartee at parties. Come see the results for yourself. Nominated for Foster's Edinburgh Comedy Award, Best Newcomer 2013. As seen on Live At The Apollo (BBC1), Mock The Week (BBC2), and Stand Up for the Week (Channel 4). 'For a man who hates talking to strangers, Romesh Ranganathan proves rather good at it' (Chortle.co.uk). 'His ability to write bitingly fresh gags marks him out from the crowd' (Guardian).

After storming Edinburgh last year with his excellent debut show, Edinburgh Comedy Awards Best Newcomer 2013 nominee and regular host of BBC Radio 4's Newsjack and C4's Stand Up For The Week Romesh Ranganathan returns to the Edinburgh Fringe with his new show Rom Wasn't Built In A Day. He is undoubtedly one the most exciting new comedians breaking through in the UK right now. With a uniquely fresh stage presence Romesh uses his trademark acerbic wit in his attempt to understand what the hell life is all about.

Romesh is an inadequate human being and he wants to address that. Through reading self-help books, watching documentaries and delivering witty repartee at parties, he is doing his best to improve himself. But, Rom Wasn't Built In A Day.

The man certainly isn't work-shy though, in the last eighteen months alone he has won the Leicester Mercury New Act Award 2013, been nominated for the Edinburgh Comedy Awards Best Newcomer 2013 for his first show Rom Com, starred on BBC1's Live At The Apollo, become a regular presenter on the topical C4 show Stand Up For The Week and appeared on Mock The Week (BBC2), as well as supporting Ricky Gervais, Bill Burr and Seann Walsh live. Romesh will embark on his first UK tour this Autumn.